JTINTER (2615) was removed from my portfolio. It became my first ever stock to be sold completely from my portfolio. Actually, it was among the first stocks that I bought since I started to invest in Bursa about a year ago. I bought 200 shares of it on 28 June 2013 at a price of RM 6.75 per share. That cost me RM 1364.41 including transaction fee.

The stock was sold not because I wanted to, but due to the compulsory acquisition by JT International Holding B.V. to acquire all the remaining ordinary shares of JTI. During the whole take-over process since April, I received a few letters to asking me to accept the offer. I did absolutely nothing: I didn’t entertain any of the letters.

The end result was: I received a notice yesterday about the compulsory acquisition and a cheque to refund all the shares that I owned at a price of RM 8.20 per share. 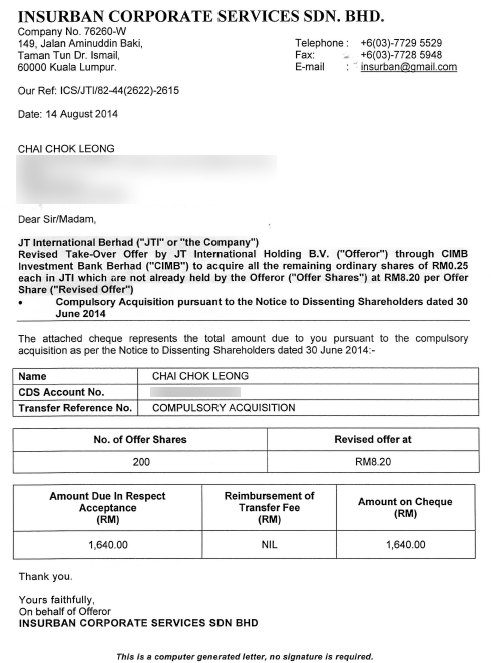 Total return from the above investment:

. Holding period (the day I bought the shares till I get the cash back): 1 year and 53 days.

This serves as a record for me selling my first stock since I started to invest in Bursa. It seems like it is impossible to hold on to a stock forever. Things might happen along the way that interrupt with my intention which is to never sell a single stock forever.