This is a record of me getting dengue fever and getting admitted to the hospital. The whole process is recounted here as a reference for others interested to understand more about dengue fever and its treatment. The story began about 3 weeks ago.

September 23, 2014, Tuesday: After having lunch with colleagues at a Thai’s restaurant, I started feeling uncomfortable with my throat in the afternoon. That night, I couldn’t sleep well, I had a serious sore throat. My throat was burning and it felt dry. I woke up in the middle of the night and took a medicine (Ernest Jackson MAC Dual Action Blackcurrant flavour, Hexylresorcinol, similar to Strepsils) that I bought from pharmacy some time ago and kept it in my mouth and went back to sleep. It lasted until I woke up around 0530 in the morning.

September 24, 2014, Wednesday: My sore throat became better while at work in the office. But starting at noon, I had mild pain all over my body, legs, especially my back and I had migraine too. I couldn’t sit properly and couldn’t concentrate at work. That night, I took 2 Panadols and had a good sleep. Panadols have pain-killer effect.

September 25, 2014, Thursday: Woke up in the morning feeling ok. Took Panadols again. At around 1000, the backache and migraine returned. I took half day off from work and went to Polyclinic Pan-Medic at Krystal Point. The queue was long. I waited for more than one hour before my turn to see the doctor. Suffering while waiting. I told the doctor about the symptoms and he gave me Paradeine (Dynapharm, Paracetamol 500 mg, Codeine Phosphate 8 mg) and Ponstan 500 mg (Dynapharm, Mefenamic Acid 500 mg). Fever 38.1 Â°C. 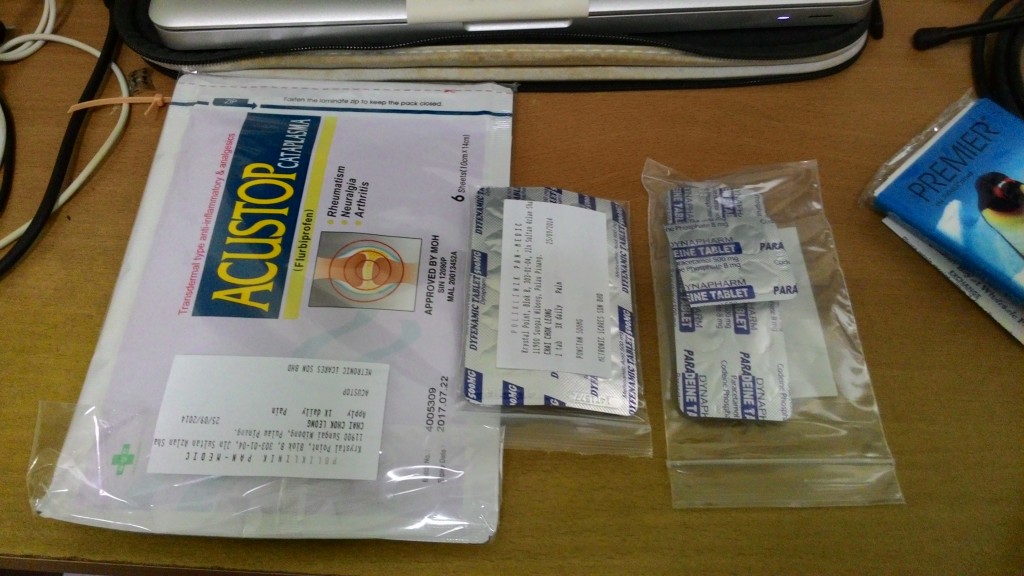 Plaster for back pain and medicines

I went back home at noon after lunch (had porridge as suggested by clinic doctor) and slept.

At night, unable to sleep well. Body feeling uncomfortable (I am unable to describe the exact experience).

September 26, 2014, Friday: Feeling ok in the morning, however, due to the effect of the medicine (sleepy), I took leave for this day.

At lunch, food started to taste weird. I took the medicines after each meal (2 Paradeines and 1 Ponstan) and was hoping to get well soon.

Lost appetite and unable to sleep well due to hunger. Body felt itchy while sleeping. Sweated.

September 27, 2014, Saturday: The situation worsened. I completely lost appetite and was unable to eat. Everything tasted bitter, even drinking water. (I started to blame the medicines that I was taking thinking that they were the causes for my situation. Therefore, I stopped taking the medicines.)

Slept whole day at home. Leg started to feel weak. I tried to go to clinic again at around 1600 by bus, but it was closed.

Finally, I went to Pantai Hospital around 2000 by taxi (RM 12). Registered at the counter with IC and AIA insurance card from company, and went to see doctor.

The last doctor, which was also the one in charge of me, suspected that it was dengue fever. The nurse then put needle on my right wrist. The experience was horrible. I felt pain and my index and middle fingers were completely numb during the process. She took some blood and started the hospital drip – intravenous therapy.

Intravenous therapy (IV therapy or iv therapy in short) is the infusion of liquid substances directly into a vein. Intravenous simply means “within vein”. Therapies administered intravenously are often called specialty pharmaceuticals. It is commonly referred to as a drip because many systems of administration employ a drip chamber, which prevents air from entering the blood stream (air embolism), and allows an estimation of flow rate. – Wikipedia

Then I was sent to level 2 in a 4-bed room waiting for the blood test result (room 232D). The room was very cold. It has TV with Astro (åŽä¸½å°). But the TV is hanged from the ceiling which is too high up making the watching experience uncomfortable because I had to hold my head up at least 45Â° (not a good posture).

At around 2200, the blood test result was out, and I was confirmed that I had dengue fever. Platelet 97. 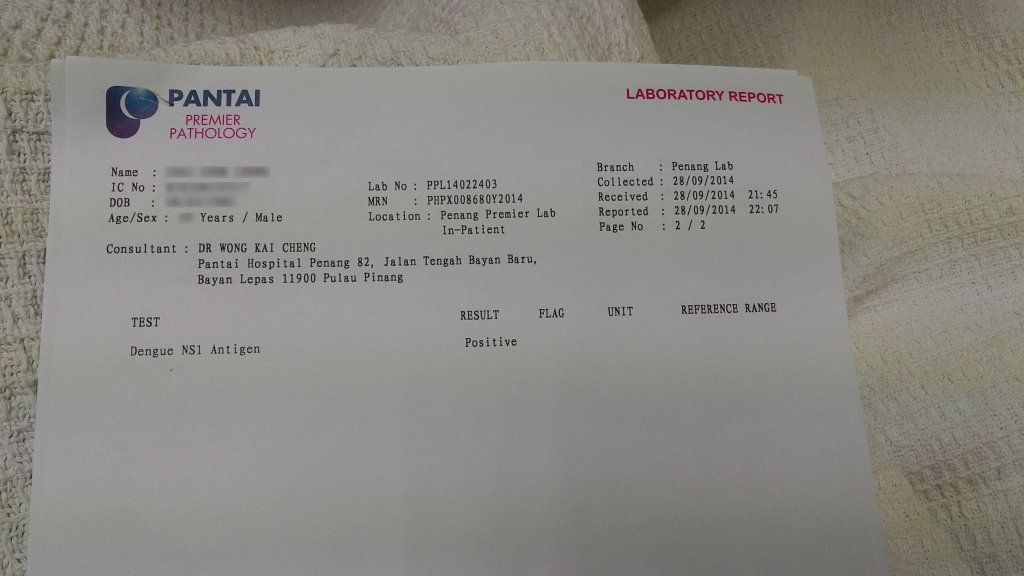 I asked for something to eat and the nurse provided Milo and some biscuits. For the first time after these few days, I finally found something that could cure my hunger: hot Milo and biscuits.

Every 3 to 4 hours, the nurse would come and take the body temperature and blood pressure. It did affect my sleeping. The drip was replaced once it finished.

September 29, 2014, Monday (admitted day 2): The drip was removed in the morning around 0800 when I was having breakfast (bread, jam and butter) due to the fact that doctor saw that I had appetite and could eat normally. A total of 3 bags of intravenous fluid were used.

Since I was confirmed with dengue fever, someone came to ask questionnaires about where I live, where I normally eat, what time I go to work, where are the places that have mosquitoes, do I know anyone who has dengue, does the office have mosquitoes, how are my housemates, etc.

At noon, my colleagues (wh, hl) came to visit bringing food and drink (that I still haven’t finished till this day): 100 plus, Vitagens, breads, Nestum, etc.

I chose porridge for my lunch and dinner which, at hindsight, was a bad choice because I was having great difficulty finishing the meal. My appetite was not fully recovered.

In the afternoon, the nurse provided the medicine for vomit.

September 30, 2014, Tuesday (admitted day 3): Felt a lot better. My legs were not longer feeling weak. I could walk with ease. (I think having a good night sleep is really important for recovering).

No longer had fever.

At noon, I changed from a 4-bed room to a 2-bed room at room 103B. This change was because of the fact that the AIA insurance from my company entitles me for at least a 2-bed room. This room is warmer and close to window.

Appetite not fully recovered during lunch and dinner.

Didn’t sleep as well as the day before. I didn’t take bath for a few days already. This affected my sleep.

Appetite not fully recovered during lunch and dinner.

The needle on my right wrist was removed.

At around 1000, the blood test result was out, and I was discharged. Doctor prepared a MC for the whole week. 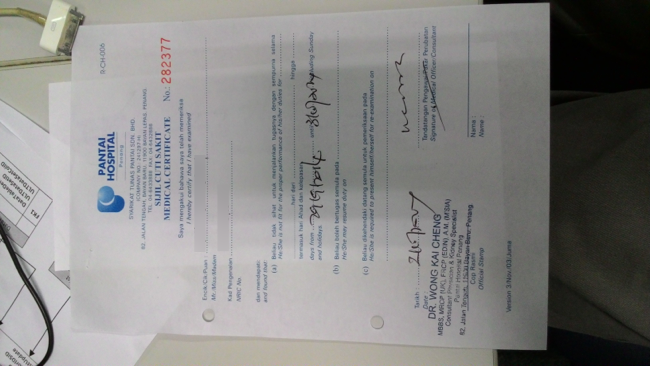 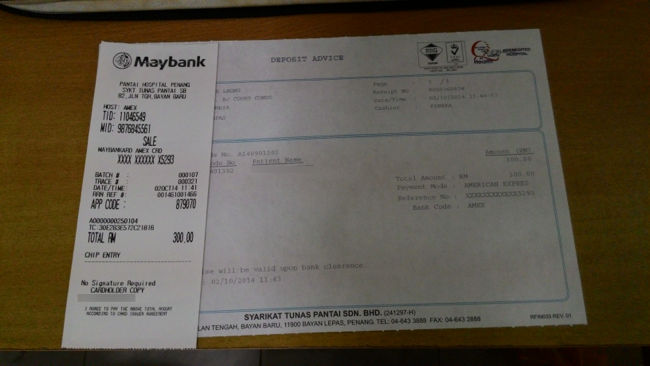 The prescribed medicines were 4 pills of Panadols. 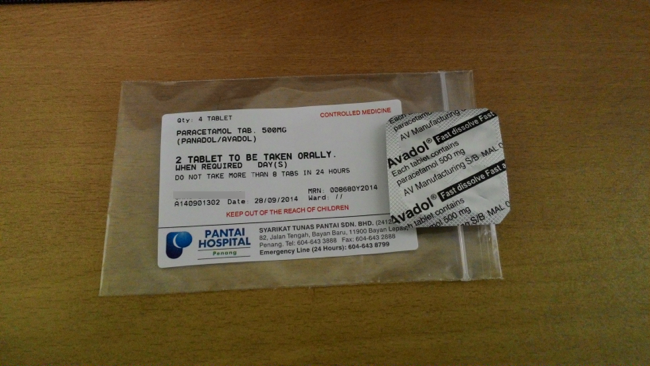 On the day that I was discharged and back to home, I saw a notice at BJ Court that during that week, there were 7 cases of dengue happened at the BJ Court alone! I was one of the unlucky victims.

Below is my platelet and white blood cell levels during the treatment at Pantai Hospital:

From this experience, I learned that you can:

There isn’t any cure for dengue. Your body need to recover by itself. During this time, you will lose appetite, unable to sleep well (itchy skin) and feel weak.

Some colleagues recommend papaya leaves for the recovery. I haven’t tried that yet. 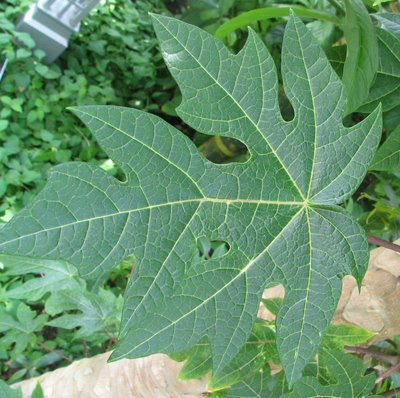 After discharged from the hospital, my brain felt hard to concentrate for the next several days. I think that is the side effect of the dengue fever. However, up till today, I no longer have that feeling. I think I am fully recovered.