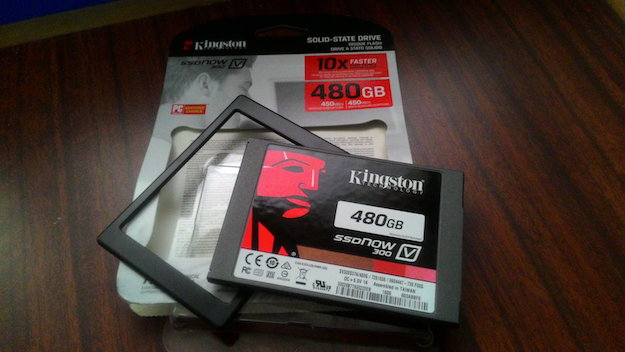 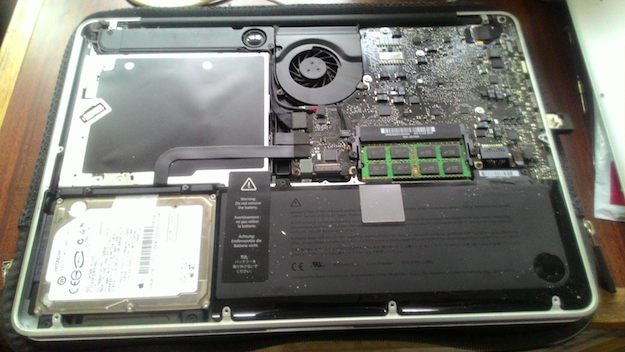 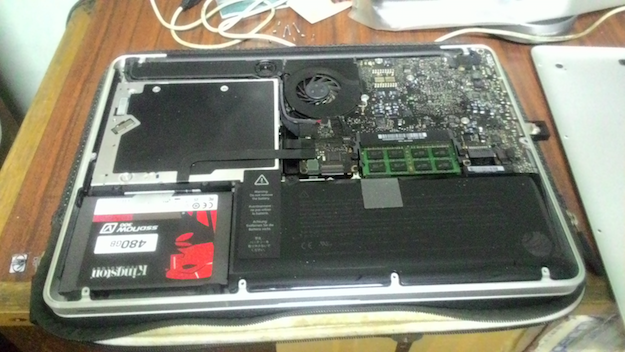 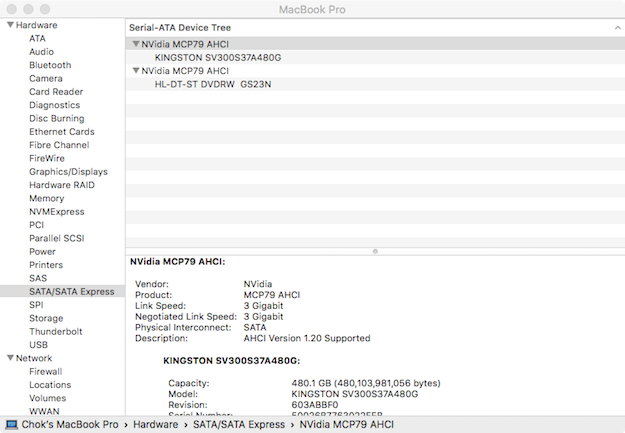 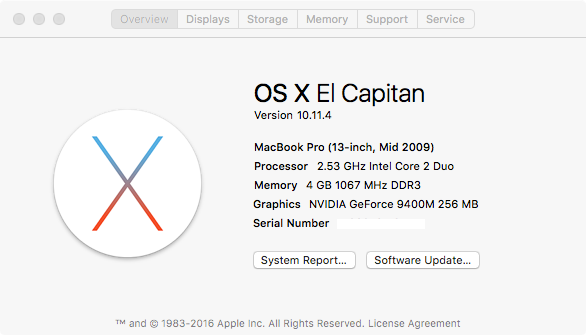 Apple MacBook is idiot-proof. I proved this myself.

The incident happened on my unlucky Friday morning, 29 January 2016, where there were some updates available for my six-year-old MacBook Pro. I was supposed to upgrade from OS X Yosemite 10.10.5 to the new OS X El Capitan 10.11.3.

I clicked “upgrade” from the App Store and waited for the laptop to restart. I walked away for some drinks and came back. Everything seemed normal until this point where my stupidity changed the course of the event. When I saw the laptop was shut down (it was actually in the process of rebooting), I pressed the start button to turn the laptop on.

That was when the trouble began. The MacBook Pro was not able to boot correctly. It stuck at the boot screen with (approximately) 50 % in progress forever. I waited 6 hours before I tried to reboot after reading from the internet that Apple MacBook is smart enough to resume the update or upgrade anywhere it left off. So I tried again in the evening (by pressing the start button twice, first long press to shut down, then to boot) and let the laptop booting for the whole night.

The next morning, it was still stuck at 50 % in the startup process (after more than 12 hours of booting). I realized that my situation was different from the others who had the “same” problem. Mine was definitely a different case where something was corrupted (I suspected) because I pressed the start button exactly when the laptop was about to restart.

I searched online and found some useful short-cuts to get into different modes while booting a MacBook.

Note: From my experience, in order to enter the different modes successfully, you need to press and hold the key combinations after the white backlight lights up on the screen and you can release them after you see the Apple logo appears during the startup process.

I tried Command-Option-P-R to reset NVRAM: It did reset the NVRAM because I observed that something restarted after I pressed those keys. However, the booting process still hung at 50 %.

I tried Shift ⇧ to enter Safe Mode: I was not able to enter safe mode at all even after waiting for a long time.

I tried Command-S to enter single-user mode: I could enter this mode (with a bunch of texts on the screen), however, it stuck at the place where it needed access to “Macintosh HD”. So I never successfully try anything in this mode.

I tried Command (⌘)-R to enter OS X Recovery mode: After successfully entered this mode, I was offered several options. 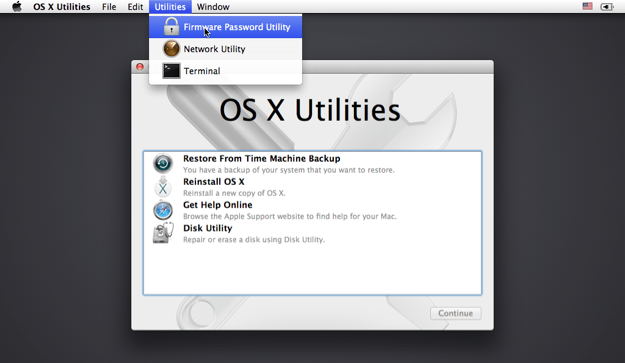 In recovery mode, you have the following options:

The last option “Disk Utility” was where I spent the most of my time trying to rescue my old laptop.

From the Disk Utility interface, I saw that the “Macintosh HD” was greyed out.

At some point, I came across this interesting article which states that by keep on repairing the disk N times (with N large enough), it could work. But it didn’t work for me.

I even tried with bash script: “for ((c=0;c<25;c++)) do diskutil repairVolume /dev/disk0s2; done;" Note: disk0s2 is the identifier for “Macintosh HD” drive. Run “diskutil list” on terminal to find out.

All the time I was getting:

I was convinced that “Macintosh HD” was corrupted and dead.

Since I was having no success trying to backup my data, I gave up doing it. The idea then was to reinstall OS X on “Macintosh HD” drive, hence potentially overwriting all my files. I was ready to erase and repartition “Macintosh HD”. This failed too. The disk was in really bad shape I thought to myself.

By consequence, the disk didn’t show up as an option when I tried to reinstall OS X. The whole day passed with no progress.

USB Drive to the rescue

The next day, I had no choice but to install the OS on external drive. I choose the cheapest option: USB drive (at least 15 GB of storage else OS X won’t install). 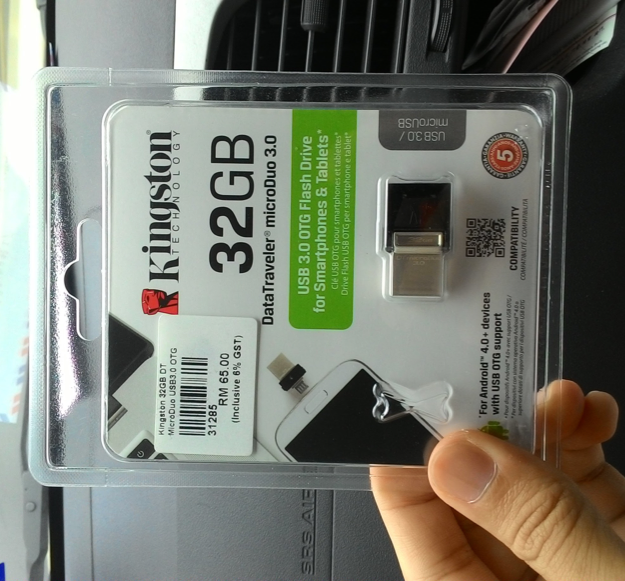 It took at least 6 hours to download the OS and install to the USB drive. At first boot, everything was so slow. The runtime experience was really bad. But I notice one thing when I opened System Preference > Startup Disk, I saw the following: 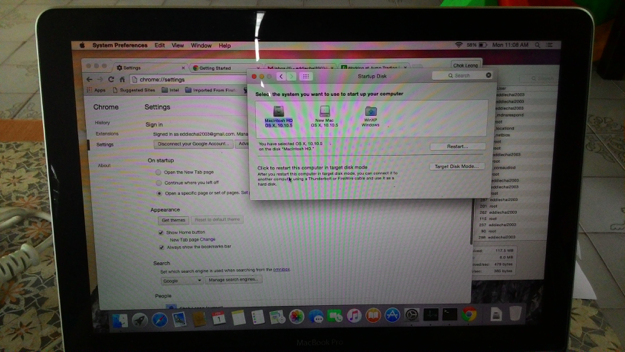 I saw something unbelievable: the “Macintosh HD” that I thought was dead is now available as a start up disk. Sure enough, after I selected it as the startup disk and rebooted, everything is working as normal again! My data is not lost. 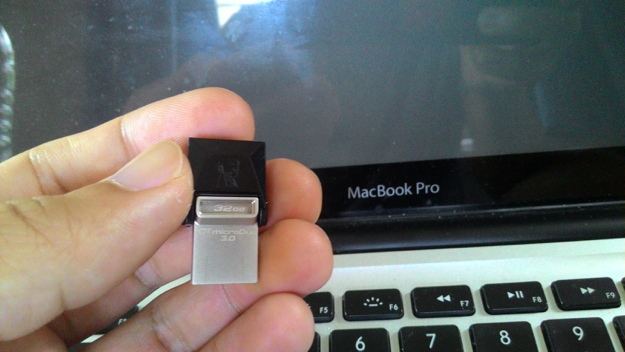 USB drive that saved my MacBook

When Disk Utility can’t repair your disk, reinstall OS X on an external drive and see if your data is accessible again.

If you only had a Mac with you and you need to work on a project which was written in Microsoft proprietary language (C#), what would you do? I did a quick search on Google and most of the results pointed me to the Mono solution.

Mono is a cross platform, open source .NET framework. It is being sponsored by Xamarin, a popular C# development platform for mobile (Android, iOS) apps, Mac and Windows. Without further ado, I quickly downloaded and installed the Mono solution.

To start using Mono, you will need to install 2 things:

After installing the Mono package and Xamarin Studio (the installation process was quick and painless), I started playing with the Xaramin Studio. To my surprise, the interface is very similar to Visual Studio. I can even say that Xamarin Studio is the Visual Studio for Mac. 🙂 This is good news for C# developers since they don’t have to go through the steep learning curve of picking up a new development tool. 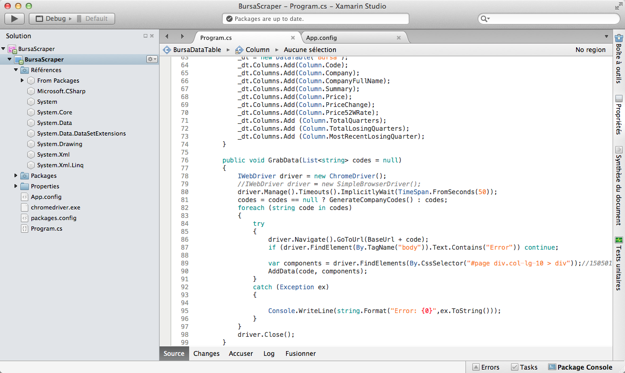 Xamarin Studio can open the solution file (.sln) of an existing C# project directly and build the solution without any additional configuration. This is very good. Another good thing is it also has the Nuget package manager integrated in the IDE. NuGet is helpful for finding useful open source packages like Selenium which I need for development. 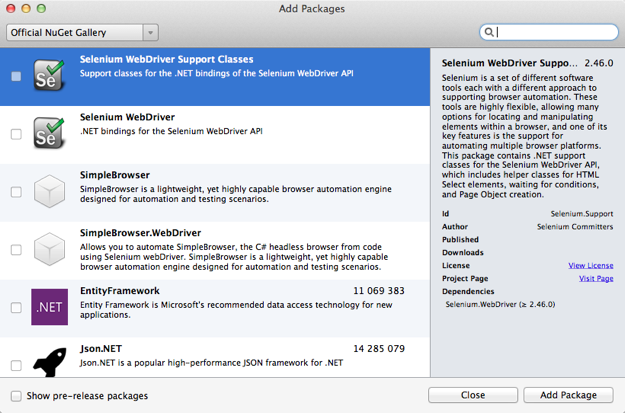 Xamarin Studio has built-in Git and SVN version controls support. If your project is version controlled, it will auto-detect the setting and track your pending changes in the IDE. Cool.

It also has the powerful auto-complete feature which literally helps you write your program. The contextual menu has the common options as in Visual Studio like auto-resolve namespace if you are using a class from a non-referenced namespace, rename variable throughout the solution, refactor selected code, etc.

I haven’t tried the debugger fully due to the exception encountered during run-time for the library that I was using. It does have the step-over, step-into, step-out features.

The program that is built using Xamarin Studio can run on a Windows directly too (as long as you don’t use any Mono specific libraries according to this and vice versa where you don’t use any Microsoft/Windows specific libraries such as WPF, Workflow Foundation, COM+ etc in order for the program to build correctly using Mono). I tested the program on the Amazon Elastic Compute Cloud (Amazon EC2) service with Microsoft Windows Server 2012 Base 64-bit (which is free).

Well that’s it. Xamarin Studio, the Visual Studio for Mac.